To borrow a phrase from my good friend and associate in Ecuador, Hector Quintana, '' pay peanuts, get monkeys .'' It is simple as that !

Now before I go on, someone is bound to write and say, '' Hey ! That's not a monkey in your photo !'' That is absolutely correct !! He was one 'heck of a big, ornery gorilla'' who hurled chunks of dirt at people watching him and he was one ''monkey'' that you would not want on your back. For some reason some Expats are looking to have him as their companion.

Apparently, there is a category of Expats who want to do everything on the cheap. In actual fact every culture has the penny pinchers but as Expats they seem more obvious. Maybe when we were in our youth, Europe on $10.00 a day was a ''real trip man'' but if you are serious about taking up the Expat lifestyle, leave some space in your budget to pay for professional advice. In Colombia, it is very easy to find yourself in hot water if you do not take the appropriate legal steps.

I have a client, who years ago brought in a small amount of money to his Colombian wife's account. It was about 7,000 usd. In his naivety, he signed the forms the bank gave him and went about his business. About 6 months later, 2 investigators from the Superintendent of Finance Office came knocking on his door. He was being investigated for money laundering. After a 6 month investigation, he was relieved of the charges as his lawyer actually proved to the investigators that the bank was negligent. This was fortunate because rarely do the banks take the blame. Bringing money into Colombia is a serious business. You can bring up to 10,000 usd in cash without declaring it. After that you must declare the amount. If you don't and you get caught the fines are steep. Usually you are looking at 200% penalty. On 10,000 usd, well 20 'grand'' is not cheap but if you do it incorrectly on a purchase of a property at 200,000 usd, the penalty could be 400,000 usd ! That's correct, FOUR HUNDRED THOUSAND DOLLARS !

If you have a bank account, you can have the bank make the transfer and they should have you fill out the FORM 4 or FORM 5, depending on the use of your funds. There are other excellent financial institutions that can help you do this as well. My personal favourite is ''Alianza Valores''. You should also use a lawyer or someone who completely understands this process. You are taking a huge risk if you use your girlfriend, or the friend of a friend etc,. Something else important to note, don't sent money to your girlfriend's bank account - or anyone else's account. Far too often have I seen this money disappear - along with the so called girlfriend.

Having the Form 4 or Form 5 filled out is going to cost you money. Actually there is a little bit more involved than just filling in the blanks. I would advise looking for a lawyer who charges a fixed fee. Our firm, Steckenreiter Serna and Associates charges a fixed fee. Other firms charge a percentage, anywhere from 0.5% to 1.5%. For example 0.5% on 50,000 usd will cost you 2,500 usd. On 500,000 usd, you might pay the 2,500 usd as well. I actually admire their chutzpah. I just know, as a consumer, I would have trouble ''stomaching'' this fee. I feel the same about the bank exchange fees and that is why I recommend Alianza.

As a side note, I know that Bitcoin/digital currency is becoming a very popular way of moving money internationally without government controls. I would caution the use of bitcoin in Colombia because money is regulated in its flow in and out of the country. If you do not declare money entering the country, whether it is bitcoin or gold or whatever form of currency, and you end up with assets here where you can not prove the providence of your money, I guarantee you that you will be investigated for money laundering. Not only that, you will have more than one monkey on your back. You will have a band of ''gorillas'' and I do not believe they will know that old Beatles tune, ''Help !''

We have discussed this previously on the air and in written articles, the Expat community is filled with often well meaning people, with inexpensive advice, at least on the surface. We recently published a piece called ''Faulty Towers''. http://www.escapeartist.com/colombia/live/2014/11/17/faulty-towers/ . One of the themes of this piece was that Expats often call to have a contract reviewed for the purchase of a new condo. They might want to pay ''a hundred bucks'' for a quick review of the document and not much more. The purchase of a new condo is much more complicated than an old one. If you want to have a thorough job done, then much more than a glance thorough a purchase agreement should be completed. Often the fiduciary contract for the company that will manage the payment of your funds to the builder is over 50 pages ! If you are serious about buying a new property then you need to have a thorough property study done. You might think that this is a simple task. As a new project, there would not have been any previous owner except the builder - however, the construction project maybe over 3 or 4 lots with a great deal of history. If you are spending 300,000 usd or 400,000 usd on a new condo, doesn't it make sense to do your due diligence ? Remember in Colombia, there is no title insurance !

Time and time again, I see people unwilling to pay a little money up front to cover their ''assets''. Time and time again I see people willing to take advice from people who may not know all of the details. Something we see in many countries where Expats are flocking are foreign lawyers, keen on doing business in this new territory. It is important to remember that unless they are registered with the bar association of that particular country, these individuals are no longer ''lawyers'' and should not be representing themselves in such a manner. Of course, if they are representing a foreign firm in a local deal that is another story. Law in Latin America is based on the Napoleonic Codes and as a result requires study and a degree in the appropriate country.

I have stated this before and will do so again. If you are going to do business in a foreign country, deal with a reputable professional whose business is dealing with Expats. Use someone who has ''skin in the game'', a professional office, professional promotional material, etc. The sidewalk cafe vendors of services or cheap Expat assistance may cost you more money in the long run . http://www.escapeartist.com/colombia/invest/2013/10/14/apartment-collapses/

It is so true, especially in the Expat world, '' pay peanuts, get monkeys !'' 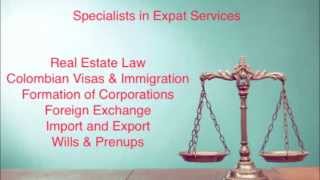